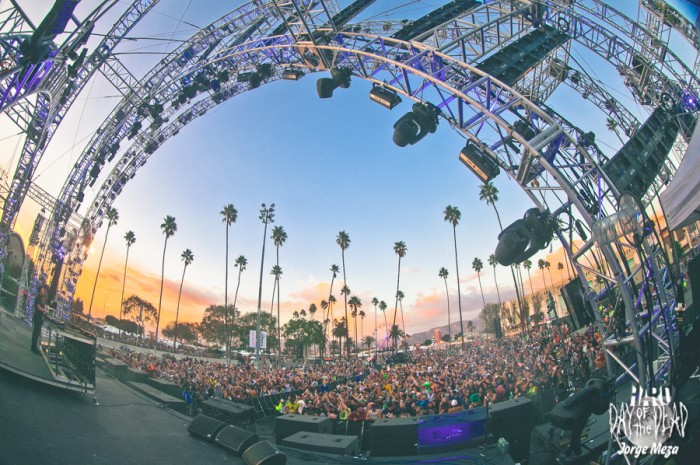 The beautiful Pomona Fairplex was the perfect venue for the weekend festivities. Photo via Jorge Meza/Hard Day of the Dead

Hard Day of the Dead has made a statement in the festival circuit with their lineups that feature the hottest and most innovative acts in all of electronic dance music.

When purchasing a ticket to this Southern California electronic dance music festival, you are guaranteed every penny of your investment will be worth it.

We have seen some great lineups in our time. There are those lineups that immediately compel you to call your friends, lineups that make your jaw hit the floor, and then there is the Hard Day of the Dead lineup. Usually it is relatively easy to just go with the flow, but the Hard DOTD lineup featured so many massively talented ‘can’t miss’ producers that deciding which stage to attend was a recurring problem throughout the entire weekend.

From venue to vendors, the staff at Hard Day of the Dead did an amazing job ensuring all aspects of the festival were on point. 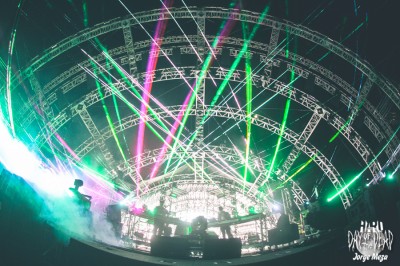 Photo via Jorge Meza/Hard Day of the Dead

Whether your preference is grimey trap music, techno, or something a little more ‘housey,’ the vast stage selection with themes ranging from RL Grime’s VOID to the Dirty Bird BBQ offered something for everyone in attendance.

One of the biggest questions going into the weekend was how the new venue would compare to previous Hard events held at different locations.

Having had location issues in recent years, it seems DOTD may have finally found a home at the Pomona Fairplex.

Home to the L.A. County Fair, the absolutely massive venue was the perfect spot for an electronic dance music festival. With more than sufficient room for dancing, there was not a single instance that venue felt overcrowded despite an estimated attendance of 80,000.

In addition to all of the on point amenities, there was not a single disappointing performance throughout the entire weekend.

We take a look back at 10 of our favorite performances from Hard Day of the Dead.

Pretty Lights with the live band 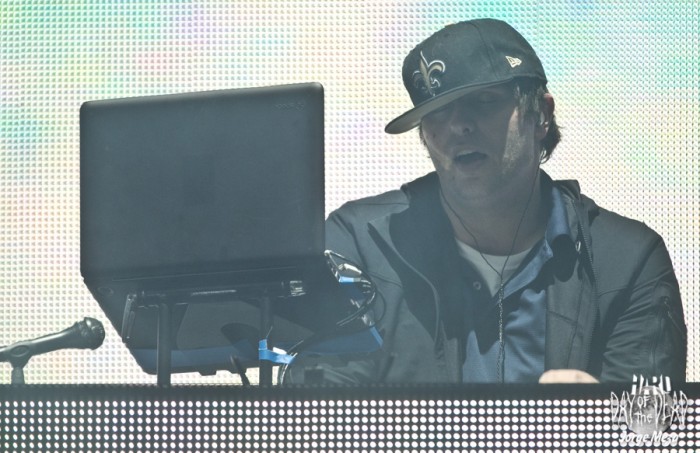 Few producers are as invested in the production and performance of their music as Derek Vincent Smith. The PL family has been clicking on all cylinders over the last few years and the live band has taken these performances to the next level. While it is hard to top the Red Rocks performance with The Colorado Symphony, every time Pretty Lights and the live band come together, fans are in for a treat.

Despite not drawing a large turnout (thanks to conflicting set times with Knife Party, Deadmau5 vs. Prydz, and Odesza) Jamie Jones threw down funky, new-age techno that had those in attendance lost in the music. As always, Jones exudes his appreciation for hardcore techno-heads by crafting sets that are seemingly out of this world. This headline set was no different despite a weak representation by fans.

This very well may have been the best set of the weekend. The Seattle duo proved why they were worthy of a headline spot while introducing the crowd to their latest full album In Return.

With so much hype surrounding the first ever festival performance by the mystery producer, it would have been easy to disappoint.  This wasn’t even close to the case. Smoke continuously billowed from the stage while graphics and a strategically placed screen continued to mask the man behind the decks. From what we saw, ZHU easily drew the largest crowd of the weekend, which did not turn out to be a poor choice. From start to finish, the crowd was grooving as ZHU threw down everything from originals like “Faded” to remixes of Michael Jackson’s “Thriller.” 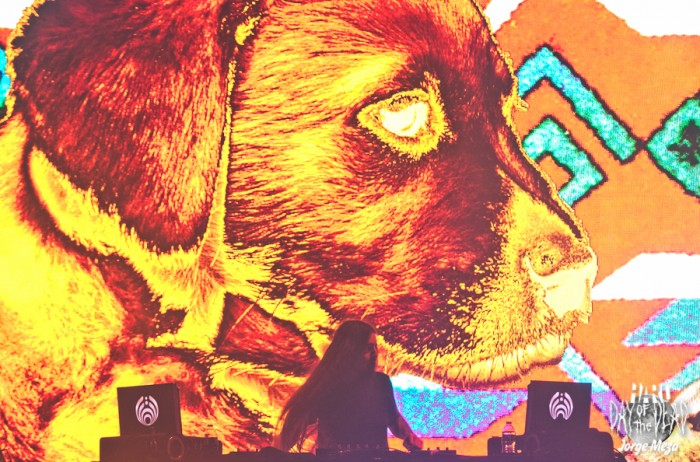 Bassnectar throws down at Hard DOTD. Photo via Jorge Meza/Hard Day of the Dead

What a way to close out the entire weekend. As if our bodies were not already sore enough from noodling around all weekend, Bassnectar made sure that you were moving with his masterfully crafted original set. The only negative stemming from this performance was being bed ridden afterwards due to so much head thrashing. 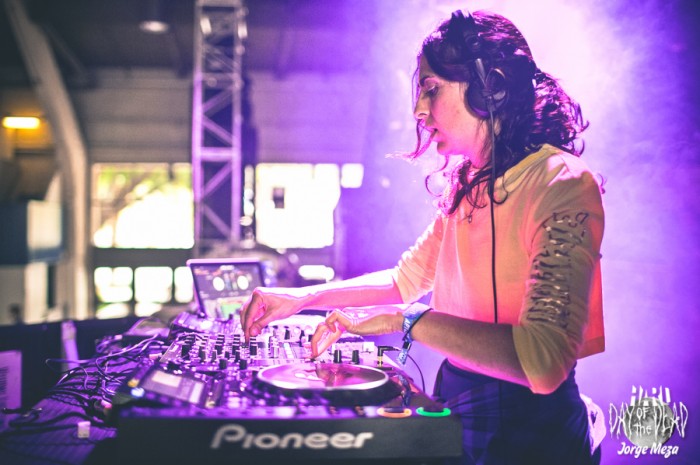 Fresh off the All Out, Fall Out tour, the stage was set for Anna to show the crowd what’s really good. Walking to the performance, we overheard one eager Lunoe newbie ask his counterpart what was in store. The response could not have been better, as the recipient of the question simply stated “You gon’ learn today!” I’m sure that gentleman did, indeed, learn.

As long as we have known Zeds Dead, they have not put on a poor performance. Their performance at Hard Day of the Dead was way beyond even any thing that any Zeds Dead fan would expect from the duo. 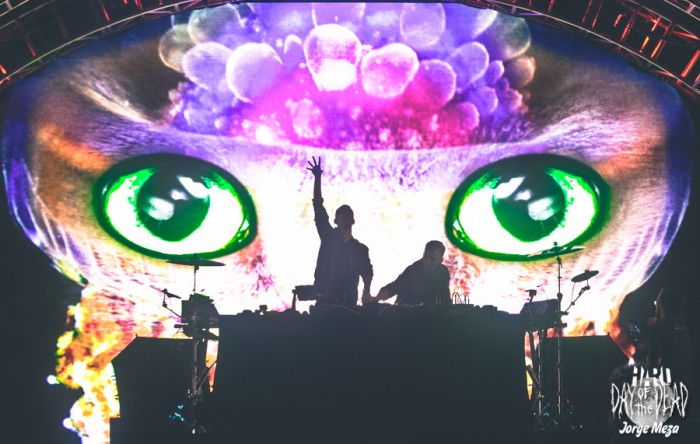 Galantis blows minds with their music and visuals at Hard DOTD. Photo via Jorge Meza/Hard Day of the Dead

Though the Galantis project is relatively new, the Swedish duo has been putting their work in the industry for quite some time. Grammy winning producer Christian karlsson (Miike Snow) and Linus Elkow (Style of Eye) had the crowd moving the entire time as they wailed away

The Dirty Bird BBQ stage might have been the rowdiest spot of the whole festival. There was definitely no shortage juicy, deep techno goodness, especially at the hands of label founder Claude VonStroke.

Just as he did at Electric Daisy Carnival Las Vegas to close out while tens of thousands accumulated for Dash Berlin at The Kinetic Field, Eats Everything put on a show for the ages. Dude went deep, reeling in fans and pulling them along for the ride.

While these were just a couple of our favorites, there was no shortage of awesome music at any given time.

Hard Events definitely brought the noise to Southern California, continuing to prove why it is one of the best electronic dance music events in The United States. 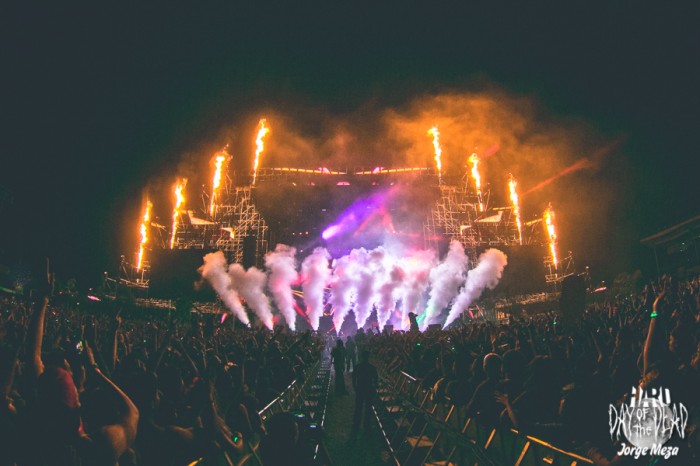 Photo via Jorge Meza/Hard Day of the Dead

Photos via Jorge Meza and Hard Day of the Dead.