House and techno collective, GROOVE-ISM, brings you house music legends Roland Clark and LA Riots, with support from Druu, to the iconic Globe Theatre in downtown Los Angeles, California. Here are a few reasons why this is a must see show if you find yourself in downtown LA on August 7th. 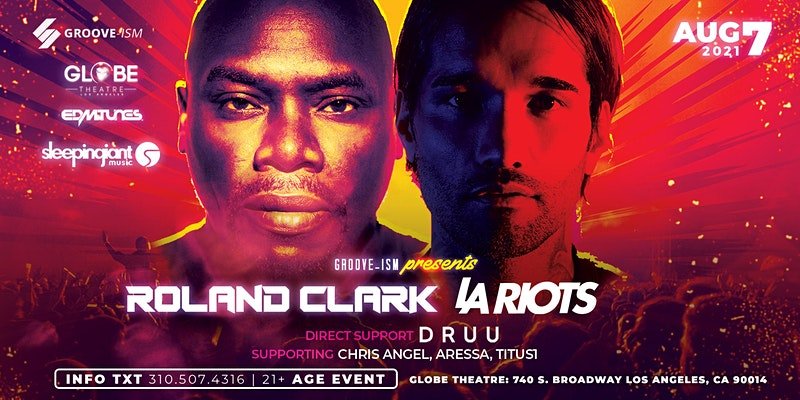 Coming off a massive Beatport #1, Roland Clark is powering back into live shows with this headline at the Globe Theater. His recent track ‘Free’ on Catch & Release with Vintage Culture and Fancy Inc is still sitting pretty in the number 1 spot of the Beatport Top10. Roland Clark is a legendary name in the house music community with collaborations other dominating artists like David Penn, Fatboy Slim, Armand Van Helden and Todd Terry. He will most definitely be bringing the heat to LA on August 7th.

On top of that, LA Riots has been an unstoppable force in the tech house scene this past year. He has released multiple floor-shaking bangers that have been featured in many big name sets throughout the year. One of these releases, is his track ‘I Call that Love‘ with Max Styler that was released on Gorgon City‘s label Realm Records. Furthermore, LA Riots has a new track coming out with Druu on Piero Pirupa’s label NONSTOP Records this August 28th that will be premiered live at the Globe Theatre event.

Droves of people floated into Nos Event Center in San Bernardino, California for the HARD Summer family reunion this past…

The Magic Behind Backwoods 2021 Festival Grounds and Lineup