Insomniac Events announced the final lineup additions for Florida’s Okeechobee 2020 as well as details about its famed PoWoW! which delivers once-in-a-lifetime musical moments at the festival each year. 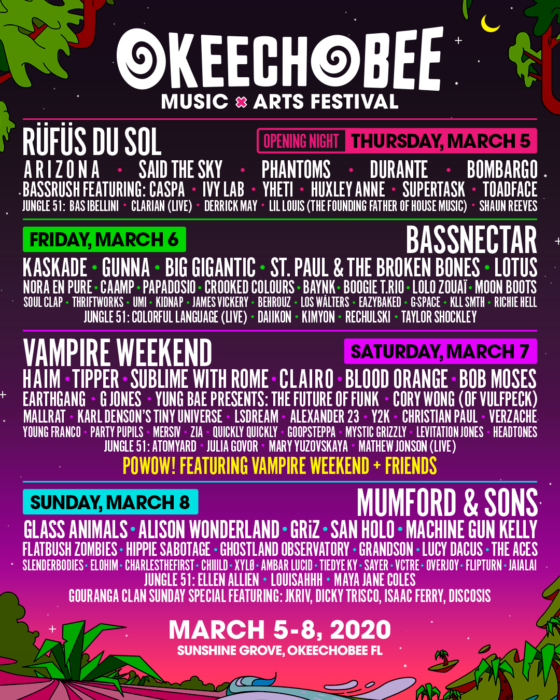 Riding the wave of multiple Grammy nominations, including a nod for Album of the Year, it was also revealed that Vampire Weekend will curate and lead the PoWoW! featuring multiple artists selected from the festival’s eclectic lineup. The PoWoW! will take place on Saturday, March 7th on the Be stage.

Come get lost in time at the Lost in Tea Lounge or shop Chobeewobee Village’s bazaar for unique OMF finds. Swim, sing, dance, and bask in the sunshine while taking in performances at the Aquachobee Beach stage, or lose yourself in the tropical enclaves of the all-night Jungle 51 stage. All in, over 100 artists will be featured across OMF’s five immersive stages, with bass music heavyweights Bassrush kicking things off with an opening night party at Jungle 51 on Thursday, March 5 that will feature Caspa, Ivy Lab, Yheti, Huxley Anne, and Supertask.

GA and VIP passes, as well as a full array of camping options, can be explored and purchased at okeechobeefest.com.