Insomniac and Madison House have once again created a stacked lineup that is packed to the max with all the good vibes for Electric Forest 2022. Many artist on the lineup are some you may have not heard of, so to get you fully prepared to make your set schedule this coming June, we made a playlist and picked a few vibey artists to tell you about. 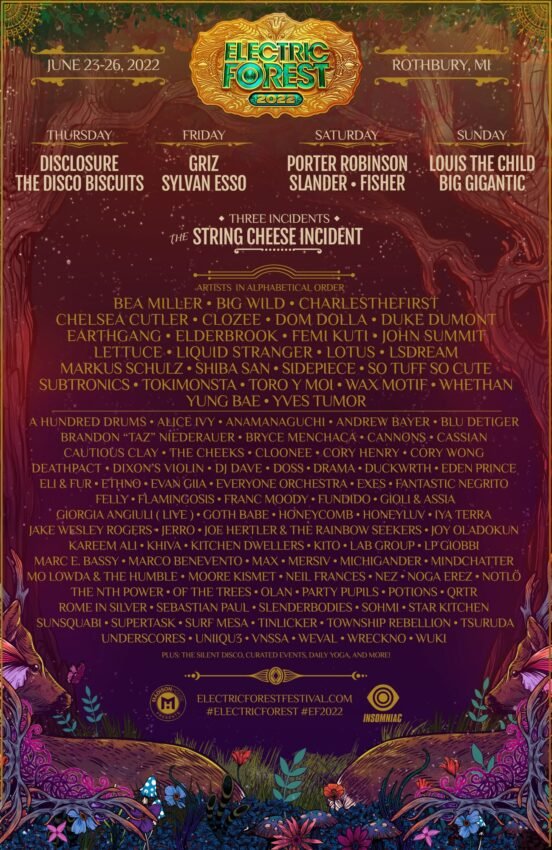 Cannons, is an Indie Pop band from in Los Angeles, CA, you may know of them for their hit song, “Fire for You”. Guitarist Ryan Clapham, and keyboardist and bassist Paul Davis had been friends creating tunes together since childhood; in 2013 they posted an add on Craigslist to search for a singer, which is where the connected with Michelle Joy, who became the frontwoman for Cannons.

Doss has shared very little info about herself over the years, allowing the music to really be the focus of her existence as she’s dubbed her sound to be “Real Emotion”. Her latest EP 4 Hit Songs is exactly that, 4 hit songs! Be sure to check her out at Forest for some exquisite vibes.

DRAMA is the dark and passionate musical collaboration between Na’el Shehade and Via Rosa. Often described as a blend of R&B and dance, their music spans a wide variety of genres including pop, hip hop, jazz, and electronic. Shehade and Rosa were introduced in 2013 by vocalist Jean Deaux, who at the time was collaborating with Shehade and friends with Rosa. Originally the project was informal, but eventually solidified into a fully formed duo with Shehade producing and Rosa singing and writing.

Fantastic Negrito, Xavier Amin Dphrepaulezz, is an American singer-songwriter whose music spans blues, R&B, and roots music. His 2016 album The Last Days of Oakland won a Grammy award for Best Contemporary Blues Album at the 59th Grammy Awards. He became inspired to teach himself how to play music after listening to Prince‘s album Dirty Mind and hearing that Prince was a self-taught musician. He learned to play music by sneaking into music classrooms at the University of California Berkeley despite not being a student there.

Felly, Christian Felner is an American rapper, singer, songwriter, and record producer from Connecticut who is currently signed to Same Plate Entertainment. He has released numerous EPs, mixtapes, and albums. His most recent album Mariposa was released March 13, 2020 on Same Plate/Sony.

Franc Moody are a musical duo from London, England. The band consists of Ned Franc and Jon Moody. Their first album Dance Moves was released in 2018, their second album Dream In Colour was released in 2020. In 2021, an EP titled House of FM followed. Franc Moody cite Daft Punk, James Brown and Jamiroquai as musical influences.

HoneyLuv is an open format DJ with a heavy concentration on the house and techno music genre. She can also bring together hip hop, r&b, afrobeats and more for any special occasion to keep the crowd pumped and dancing. HoneyLuv landed her own radio show on iLL Donuts Radio; House of Honey, that caters to house and techno music. She also made her first festival debut in 2020 at Desert Hearts.

Iya Terra are an American roots reggae and dub band based out of Los Angeles, California. On December 26, 2021, Iya Terra made it to third place with the third most votes by Facebook, Instagram and Twitter users for the fans-choice “2021 Album of the Year” by Surf Roots TV & Radio for their album Ease & Grace. This is the band’s first time being nominated with the reggae rock streaming TV channel on Amazon Fire TV, Apple TV, and Roku.

SLANDER and if found Wrap 2021 with Surprise Release ‘Getting Late’

SLANDER are no strangers to cultivating new talents. On “Getting Late”—released December 31 on their label Heaven Sent as…

Gryffin Takes Over Nebula NYC Ahead of New Year

Gryffin brought all the feels to NYC just before NYE, headlining Nebula Nightclub on December 30. The multi-talented DJ…