Brillz Talks The Twonk Tour, Upcoming Music, And His Own Line Of Pasties [Exclusive Interview] 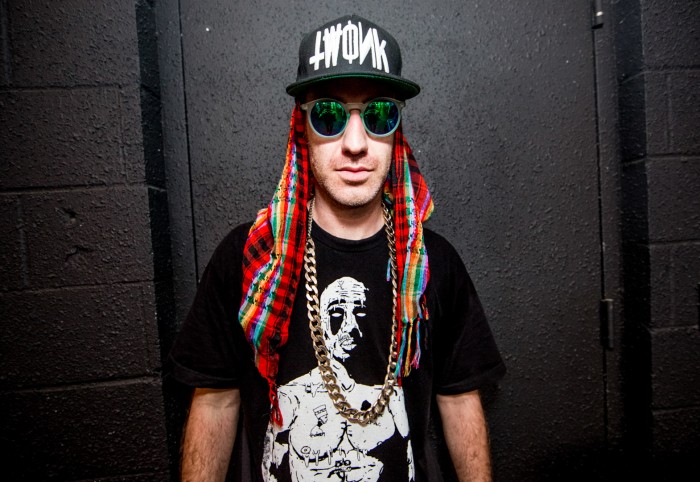 From the street, the bass shakes the brick walls of the Roseland Theater in Portland, Oregon. The sidewalks are teeming with impatient ravers, decked out in Brillz swag and Twonk attire, pushing their way past a noticeably cranky team of security workers, clearly aggravated at the sheer enormity of the crowd drawn in by the night’s musical guest. As we make it past the security gates and begin to return our government issued identification cards to their proper place, I spot the entrance to the main floor bar where I am to meet the tour manager who will introduce me to the Twonk star himself.

Past a dark curtain and a lone, middle aged guard, we descend into a dank, dimly lit basement area where dancers, photographers and other stagehands are relaxing. I’m taken to a back room and sit down, waiting to meet my interviewee. Brillz enters the room, sporting his trademark blonde tuft of hair atop an otherwise shaved head, sunglasses (despite the fact that it’s nighttime and we are indoors, in a dimly lit room), a looney tunes shirt, and armed with his vape rig.

Last November, Brillz and a crew of dance music’s finest DJ’s embarked on the Twonk Di Nation tour, travelling from coast to coast to deliver their rowdy brand of bass music to his rabid fan base across the US. Brillz talks a bit about life on the road and what it’s like living on the tour bus.

“Solid group of people, great artists, a lot of sold out shows. The bus is amazing, It’s been treating me great, I’m really excited. After the show, we’re on the bus, we’re hangin out, making music, having laughs and making fun of each other. You go to bed, wake up in the next city, get ready for the show and do it all over again. This is the second to last show, it’s been a good run.”

Since kicking off the tour last winter, Brillz has had stops in just about every major city in the country, with support from Jackal, Party Favor, Ghastly and more. The Twonk frontrunner gives us a rundown of the most outrageous performances of the tour.

“Last night was the craziest night, we did a sold out show in Seattle and then GTA came out, they were in town playing their own show so we brought them out as special guests. Afterwards they invited us to their show at Foundation. That was the only night of the tour where we had DJ homies who weren’t part of the tour, but came through and then we played their show. Actually it was a tie between last night and our show in LA where we sold out The Fonda, and we had Kill The Noise, A-Trak, and Ookay come out. Those two nights were probably the most epic.”

With a string of sold out shows supported by a crew of top notch DJ’s, it’s only natural that the Twonk tour would accumulate a plethora of crazy backstage stories, although Brillz’ lips are tightly sealed on the matter.

“There’s a bunch that I’ve been sworn to an oath about, so I’m not in a position to talk about those,” he tells me, before revealing that fans may get a chance to witness the backstage madness front and center. “We’re putting out a bunch of tour videos and there’s gonna be a lot of really funny footage, a lot of really entertaining shit happening.”

Brillz released his latest EP Geekin on Mad Decent last fall, brimming with four tracks of high octane trap and featuring collaborations with Ghastly and Que. Never one to go too long between releases, the Twonk star has been busy at work on the bus preparing his next release. Although not willing to spare too many details, he offers up a few hints to satiate his fans’ lust for new material.

“Nothing is scheduled for release yet but I’ve been working with a lot of producers on a lot of collabs, finishing up a lot of stuff. I put Geekin out and then jumped on this tour right away. I’ve been starting a lot of ideas and doing a lot of writing on the bus, but when I get back home I’ll be able to go in the studio and actually finish those collabs and probably announce another EP in a month or two.”

In addition to the Brillz project, the Trap producer and DJ reveals that he may have a few new musical projects coming out of the woodwork in the near future.

“I don’t like to hype stuff up until it’s literally happening in reality. If I say it’s happening, I want you all to get excited and then I want it to happen. I’m working on some stuff, but it’s early in development.”

Despite keeping busy with producing dancefloor bangers and DJing to sold out crowds across the country, Brillz still manages to find the time to kick off his latest venture, his own line of Vape e-liquid, appropriately titled Twonk Juice.

“We got the first flavor out which is called Jelly, and now we’ve finalized our second flavor and we’re getting ready to launch that. I’m stoked about that, it’ll be out in a couple months or in the summer.”

When pressed about the next flavor in the Twonk Juice line, Brillz sticks to his cryptic nature and explains that he doesn’t want to give anything away until the last minute.

“Gotta keep everything under wraps bro, it’s top secret. I don’t tell anyone what goes on in the war room.”

At this point, one of the Twonk dancers, befittingly named Heaven and clad in nothing but a set of pasties and some ill covering underwear, enters the room and Brillz invites her to take part in the interview.

Heaven – “Who wears the best pasties?”

Brillz – “I hate pasties. You know I hate them. Boobs are so much nicer without pasties.”

Heaven – “Did you not see the Twonk pasties? Even though you hate pasties you could have your own line of them.”

From that last exchange, it’s not hard to see why Brillz has found so much success. With an entrepreneurial mind and an eye for opportunity, Brillz has transformed himself into one of the biggest Trap stars of the year, fronting a national tour with support from a plethora of other established DJ’s while managing to launch his own line of Vape accessories.

With a new EP, some mysterious new side projects and the possibility of Twonk pasties looming on the horizon, it’s shaping up to be a major year for Brillz.