The Canadian powerhouse trio of Black Tiger Sex Machine has teamed up with LA native Kayzo on their new track ‘Lifeline’ feat. North Point. The song was released through BTSM’s very own label Kannibalen Records, which is an up and coming label that is drawing tons of attention. News broke in early 2020 that the two artists would be working together when they released the instrumental for “Lifeline.” With Kayzo recently returning from a long break, many fans are very excited to see what new stuff he has been working on over the past few years. 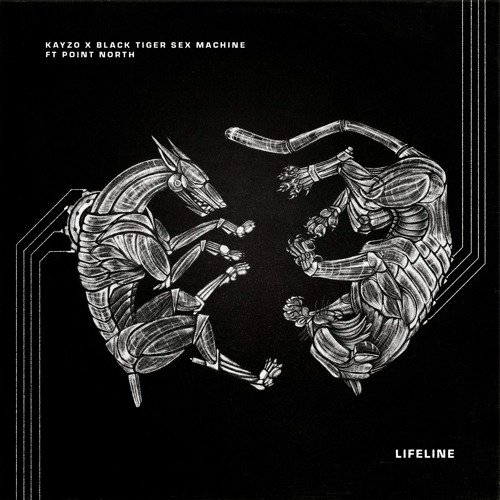 ‘Lifeline’ is dubstep heavy with hints of punk house throughout. BTSM and Kayzo have made a name for themselves off this style, and the genre itself has been making a massive comeback over the last couple of years. The song is an exceptional piece that is made truly special with the vocals of North-point. His rhythm and tone are always on point, and he fills the space of the song unbelievably.

Since coming onto the scene in 2015, BTSM has found a loyal fan base with a genuine love for their creative style. The three men take special pride in their live performances and wear their signature light-up LED tiger helmets for every performance. Their debut album Welcome To Our Church was released in 2016 and was regarded as one of the year’s best EDM albums. In 2018 they dropped their second album New Worlds that featured their chart-topping track “Zombies,” which quickly became one of the most popular songs of that year.

Kayzo, the winner of Insomniac’s Discovery Project and graduate of Icon Collective, is one of the biggest up and coming producers in music. His first song, “This Time” via Monstercat, was released in March of 2017. Throughout the rest of 2017, he dropped three additional singles “Over The Edge,” “Without You,” and “Holy.”He then took a four-year hiatus to focus on producing for other big artists. In 2020 he returned to release “Tormenta” and was set to have a big year touring, but with everything going on, he has been sidelined until things return.