The ‘King of Sound’ is known for many different kinds of bangers, from dreamy melodic bass that make your body sway and tears well up in your eyes, to headbanging like a lunatic and flailing around like a fool in complete bliss.

With Valentine’s Day and Deja Voom on the horizon, and the announcement of his upcoming show on Memorial Weekend at The Gorge, we decided to celebrate with Bassnectar´s seductive sounds… 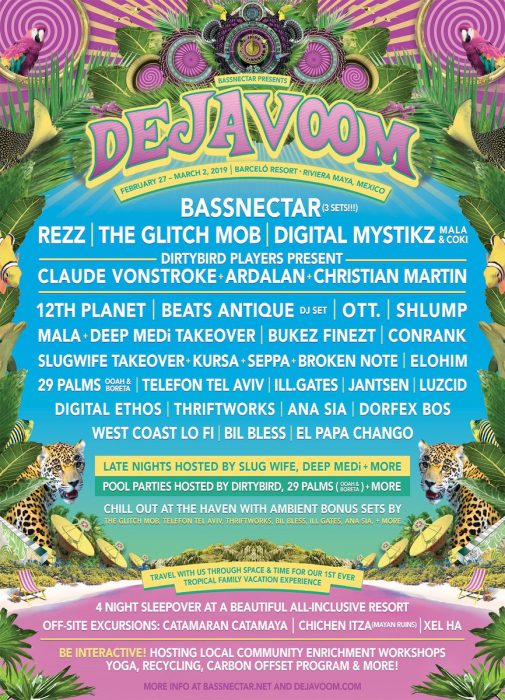 Enjoy the top 5 sexiest Bassnectar songs that hit you right in the feels.

What started out as a song called “Zero Gravity”, though it is other worldly, it got it’s name change after Lorin heard a vocal sample of “I really like it”, the sample sent him back to a morning when he was in Santa Cruz on the beach at a full moon party. ´Flash Back´ is a song that does just that, it flashes you back to moments in your life where you, yourself can remember thinking “I really like it”.

The Future is sensual, dominant, and euphoric at the same time, it’s about surrendering to a powerful, healing, and beautiful experience while looking forward to the unknown. Musically the song is like a mix of ´Hexes´ & ´Timestretch´, the uplifting, yet powerful vibe makes it a pretty sexy beat.

This sexy beat will literally leave you breathless and on cloud 9. Bassnectar and DC Breaks perfectly paired to create a drum & bass influence that brings a beatific, joyous, and inspiring vibe. (Que in uncontrollable dancing and tears).

I’ve never met a Bassnectar remix I didn’t like; Lorin perfectly tweaks every single song he touches. Marz Leon’s, Fire, was a sexy song to begin with, adding in the heavy bass makes it blissfully romantic and whimsical.

If you have been a Bassnectar fan for some time, you were just as excited as we were when he finally released this gem. ´Rusko´ and Bassnectar together is a dream come true, this song speaks to the hopeless romantic in all of us. The vibe is vulnerable, yet quixotic and ultimately uplifting at the same time, like the perfect love story.

In more news, Bassnectar is accepting application to perform at Deja Voom.

Unleashing a new idea for Deja: Open Deck slots for attendees who want to share their music and throw down on a proper sound system – there will be open slots for music makers, DJs, and beat freaks in the Lo Fi Room each night – apply here if you’re interested in getting in on the action: https://goo.gl/forms/stgv5Kc9wxwGAvAJ2 -Bassnectar

Above & Beyond Announce First ´Group Therapy Weekender´ at The Gorge

The release of Above & Beyond’s second chapter of their Common Ground Companion EP, ‘Distorted Truth’, comes on the…