British Columbia´s Bass Coast Festival 2019 has announced their carefully curated lineup. Including a wide variety of inrternational talent, this may be the only opportunity for us North Americans to catch these palpable sets.

With Boiler Room sessions freshly added to the schedule, Bass Coast has the makings of being the best festival of the summer.

Glasgow based DJ/producer, Denis Sulta and Santa Cruz native G Jones were among the first 21 artists performing and were announced this past March. Now May, over 100 artists have been added to the bill including Alix Perez, Fracture, Madam X, Stickybuds, Claude Vonstroke, Barclay Crenshaw, The Funk Hunters, Mike Slott and plenty more. 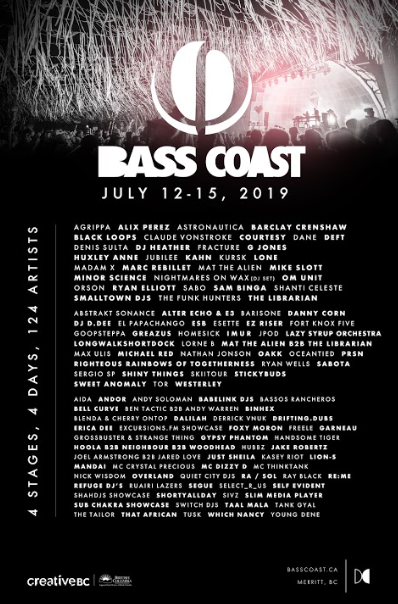 As you dive into this lineup, Denis Sulta, is definitely an artist to look out for. This proper house DJ/producer went from running afterparties to performing regular sets at Subclub. Watch his AVA Festival DJ set below to see how he gets down.

Another legend featured on this lineup is Alix Perez. This drum and bass DJ/producer, releasing his debut album in 2009, has been in the industry for a long time always packing out venues. Listen to his Let it Roll Winter 2018 set below.

A huge treat coming to Bass Coast this year will be Claude VonStroke. This American house/techno producer is the owner of Dirtybird Records and never fails to keep a crowd moving. Check out his Tomorrowland set below.

Pick up your pass to Bass Coast Festival 2019

Take a look at Bass Coast behind the scenes and find out this years’ theme, the true goal of the festival, as well as the tireless effort that goes in to make it all possible.

The Roots of Bass Coast

“A DIY endeavour founded and run by women with no sponsors or corporate presence whatsoever, it’s a unique fixture in a region already known for its plethora of festivals…” –Resident Advisor

Listen to our Bass Coast playlist: