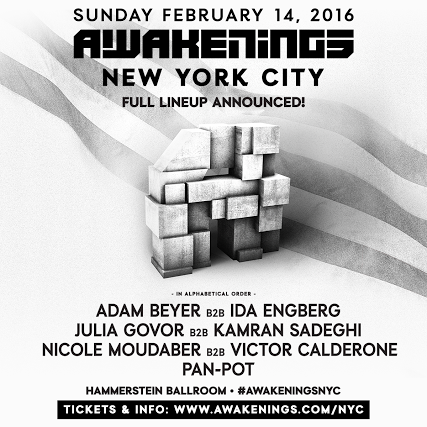 The legendary festival Awakenings is making their first stop on American soil a big one. The addition of Nicole Moudaber + Victor Calderone for a B2B set at Awakenings NYC will add to the brand’s first ever stand alone show in North America.

Awakenings’ debut in NYC will represent a homecoming for founder Rocco Veenboer. Rocco travelled to there  in 1991 to watch the ever influential Grateful Dead. So inspired by the staging of The Dead’s shows, he incorporated the Dead’s philosophy of mind-bending light shows and top-notch production into his events. Thus began Awakenings’ stellar reputation as one of the most sought after events in the world.

From the infamous Gashouder in Amsterdam to New York City for this debut event, Awakenings will bring with them the stunning production that they have become known for. Making full use of the Hammerstein Ballroom’s vaulted 75 ft. high ceilings and excellent acoustic design, the historic opera house will be transformed into a techno playground with the event running all night until 6am.

Tickets for Awakenings NYC can be found here.

The one and only Bingo Players just dropped a pretty lit mix to start off 2016. Mr. Maarten also shared…

Please enable Javascript to watch this video After much speculation, Bassnectar has finally revealed details surrounding his highly anticipated camping…