Best Of, EDM News, Interview September 12, 2014 • by Perry Finley
61
SHARES
SHARETWEET
Anyone who has had the fortune of attending a major electronic dance music festival is surely familiar with the Canadian production duo and melodic dubstep connoisseurs Leighton James and Christian Srigley, known far and wide as Adventure Club. After taking off in 2009, the duo has put out some of the most memorable dubstep tracks including “Gold,” “Rise and Fall” with Krewella, and “Crave You,” which has garnered more than 12 million plays on their SoundCloud account alone.

After headlining numerous festivals around the country including Global Dance Festival and Wakarusa, we had the chance to sit down with the guys at Imagine Music Festival in Atlanta over Labor Day weekend.

See what Adventure Club had to say about their Do Good Campaign, losing a pillow fight to The Chainsmokers, climbing curtains with Dillon Francis and more.

thatDROP: One thing that really struck us was your Do Good Campaign. Can you just go a little more in depth on how you guys got inspired to do that and how it all got started?

Leighton: We linked up with Electric Family about a year ago doing a lot of charitable work. We started doing those Adventure Club bracelets and all the proceeds have been going towards fighting cancer. Soon enough other DJs hopped on board. Now Krewella has their own bracelets. It’s definitely starting to grow. But for the Do Good event specifically, we got a bunch of our friends and fans from LA, went out to the LA food bank and all of us spent time packaging food for families in need. It’s a movement we have wanted to start with Electric Family in different cities and we also want a bunch of other DJs to participate. We plan on doing a lot of charity work with Electric Family.

Leighton: Do you want to tell them about the tank top?

Christian: I don’t think it’s a well known fact but a few people that follow us on tour and look at our show pictures know about it. I’m not wearing it right now and that’s unfortunate. This is my substitute (pointing to his tank top). I think over the past twelve months I’ve worn one specific tank top 80 to 90% of the time. It will go for like two months straight (laughs).

Leighton: It will stand up on it’s own.

Christian: And it honestly doesn’t smell as bad as you would think because I feel like it’s absorbed as much as it can. You know how water can only absorb so much sugar and then it just can’t dissolve? It’s taken in as much as it can take in. It gets washed but you know it’s not gonna do much.

So we started a Kickstarter and the title of it is gonna be “Buy Christian a new tank top.”

We are going to try and get a little bit of traction and we’ll probably get it going with Electric Family. The first $20 bucks will go towards buying a new tank top superficially and then whatever else we get, proceed-wise, will go to clothing kids in need but we need to find the right charity first.

We’re thinking the top donor’s going to get the actual tank top if they really want it.

I will definitely wash it first. I’m going to be really sad parting with it too cause I love that tank top man!

thatDROP: So when can we expect the Kickstarter to go live?

Leighton: Yeah. It’s actually gonna come out in conjunction with our new single which comes out in two weeks. Which I think we’re gonna play tonight.

Christian: We are going to play it tonight! We played it once before live. We played it last night in Chicago (North Coast Music Festival). That’s the only time anyone has ever heard it. 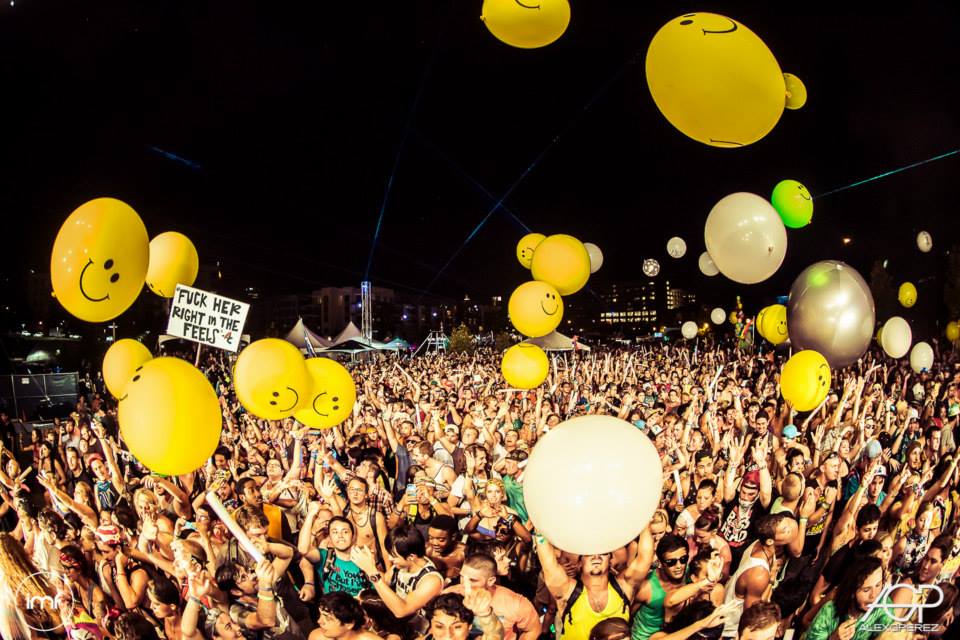 thatDROP: So y’all released your Superheros Anonymous mix recently. Can you talk about the creation behind that and were going for anything in particular with this one?

Leighton: All of them we really just try and showcase what we’re into at the moment. Artists that we think deserve it, we just show them some love and that’s all they’re really about. It’s all stuff from our friends and their music and singles we like to put on. We don’t limited ourselves in any way.

Christian: Basically all we do is we just auction off putting songs in the mix for sexual favors.

Leighton: We like to showcase a lot of people but we don’t limit ourselves. For the next one, we are actually going to get a ton of our DJ friends and they’re gonna do the whole mix. It’s going to be a wide mix covering different types and genres.

thatDROP: We also want to ask about your relationship with The Chainsmokers and how you guys met?

Leighton: They were actually fan-girling? Fan-girling the FUCK out of us. It started two years ago. They would always be tweeting at us.

Christian: They wanted our attention.

Leighton: Finally I thought, ‘these dudes look pretty cool.’ Other people kept telling us they were like the house versions of us. So we started talking to each other and they turned out to be cool dudes.

thatDROP: We saw that pillow fight that happened. Can you tell us about that? Sounds like they got the best of you guys!

Christian: Ahhhh NO! C’mon! I was watching and I don’t think Leighton was the guy who tapped out.

Leighton: No, no. Drew tapped out but that will never be shown on video. His hands were up. I made him tap out I had him in a position; a very compromising position.

Christian: Our only mistake was not having our own camera guy there.

Leighton: Any time we get together and do a show or a festival together things get really rowdy. Especially between me and Drew. I try to get fucked up with Alex but he just doesn’t have it. But yeah, that was a really fun night.

We also had a curtain climbing challenge with Dillon Francis.

Dillon made it quite high but he said he’s half my weight so his curtains didn’t really fall. As soon as I jumped up the curtain started to go.

Christian: I had just got home and I tried to take some of the weight since I was probably the most sober guy there. I knew there was no way it was going to work out the way everyone thought. They thought they were gonna be jousting on the drapes.

Leighton: That was the original plan. Me and Dillon thought we were going to swing at each other and try and knock each other off the curtains.

Christian: I ran up to try and take a little bit of the weight off the curtains and it was all for naught because they fell and got pulled off the wall.

thatDROP: The hotel staff was a bit unhappy. We heard there was a little damage behind that.

Leighton: We have been banned from a lot of hotels. Unfortunately that was The W in our home city of Montreal so they made us pay for the damages.

thatDROP: They knew what they were getting into when you booked the room.

Leighton: Yeah. At one point there were at least 100 to 150 people in that room.

Christian: Unless The W asks and then it was 12.

Leighton: Just me and my … mom.

Christian: It was one person that we don’t like anymore who did all the damage.

thatDROP: Over the course of the last few years what are some of the experience – festivals, shows, whatever they may be – that really stick out to you guys and have a special place in your heart?

Christian: Coachella is one.

Leighton: I think we have to put Coachella at the top of that list.

Christian: Coachella was the festival that our manager when we were just starting off was always saying it would be that check off the list. We dreamed we could get there and if we could play Coachella that would mean we had made it to that certain point. That was his goal and he would always say, ‘We gotta play Coachella.’ We are really good friends with our manager, so when that moment came around and we were able to be together, it was just a really magical moment.

thatDROP: Is there any one particular thing that you are really looking forward to in the next couple months?

Leighton: We are stoked to go on the Safe In Sound tour. We love going on tour with those guys.

Christian: I feel like everyone at this festival is going to love the Safe in Sound tour.

Leighton: They helped shape our sound when we were starting out. We looked up to a lot of those guys so it’s pretty cool to be part of that tour.

thatDROP: What was that moment in your career that you knew all your hard work was going to pay off?>

Christian: I’m always really grateful but I always felt like we were waiting for the bubble to just pop and it hasn’t yet. Obviously we are super grateful for that.

Leighton: We’ve never really had the mentality that we got blown up after our first big show and ‘Yo we made it and fuck this shit man’ (laughs).

Christian: When we’ve got blown up, every time we are like ‘Wow this is so amazing.’ We love it and we hope we can keep doing it again and again.

With the way things have been unfolding, this is not a concern for the guys of Adventure Club.

Their highly successful Superheroes Anonymous mixes, multiple worldwide tour stops, appreciation for their fans, and involvement with organizations that are bigger than the music will ensure that these guys are in the scene for some time to come.