You may have heard of Kyle Partin, known to the bass scene as Cut Rugs, from one of his recent releases called ‘Snicka’. It takes just a brief moment of listening to that track to know that Partin is the real deal. Cut Rugs started his journey with music at an early age. After graduating high school, Partin received a laptop as a gift and purchased Ableton for the first time.

As a student, Partin’s teacher gave him individual assignments where he would have to make an acapella track into a whole song. It was at that point where he became well-versed in the art of processing vocals and using Ableton to his advantage. The rest is history.

Cut Rugs is just a few weeks away from joining some of the most prominent artists in the bass scene at The Untz Festival in Mariposa, CA. 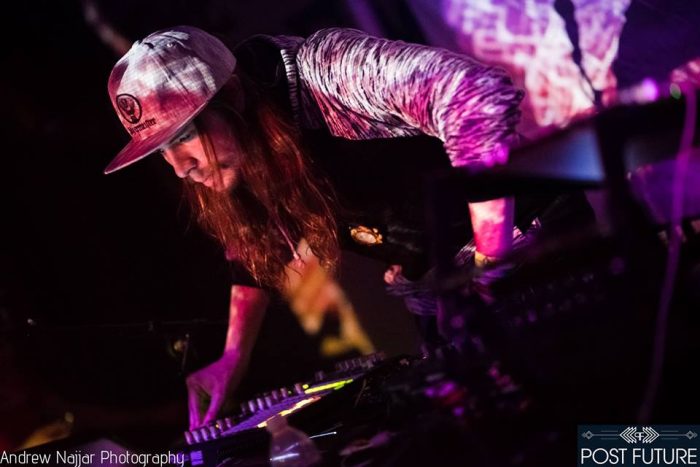 The Untz Festival is in its second year, giving proof that the underground bass is truly taking off in the US. Bass addicts from all over the country will be in attendance to frolic in the greatness that is The Untz. We think you’ll agree that they made no mistake when choosing Cut Rugs to join for an incredible weekend.

Luckily, we got in touch with the man himself to discuss everything from music to his best tour stories.

While doing some research I noticed you were pretty involved in surf contests. Were/are you a professional surfer? Is creating music anything like surfing?

In all honesty, I’m a terrible surfer. It always was more of a gimmick to talk to girls, and an excuse to look like a wook. Now that I’m a music producer I can look as wook as I want and still feel cooler than anyone else at the airport. lol However, I do often use a lot of nature sounds in my music. Spending time trying to surf gave me such an incredible appreciation for nature.

Unfortunately, not too many people stop everything they are doing and just listen. Even if its just to the soft hum of your computer or the chopping of your ceiling fan as you read this. Surfing taught me this, to just stop, listen, and appreciate being alive.

You mentioned you just got back from being on tour. Do you have any funny stories to tell us from when you were on the road?

As far as funny stories goes, I have 500 that are all too inappropriate to tell you about on here. So anyone who reads this will have to ask me in person and I’ll tell you. Although, I can tell you one of the more innocent ones. It turns out that Levitation Jones (Brian) and myself look similar with hair, height, and face or something; and this drunk-ass spunion proceeds to tell me all 6+ times he has seen me play, mistaking me for Brian. So I let him rant for 30+ minutes on it.

With Brian being a friend of mine I proceed to tell this guy I’m changing my name to “butthole jones” or “levitation butthole” (I don’t recall because I was drunk myself). I gave him a detailed story as to why the name change so late in my career. (I’ll let your imagination run wild). The guy told me that he would be seeing my on “my” Like It or Not tour, and would be greeting me (Brian) as Butthole Jones. I’m still waiting to find out if this awkward interaction ever happened, and I hope this doesn’t spoil the surprise, but I heard Brian can’t read so I think we are gucci. lmao love ya pimp! 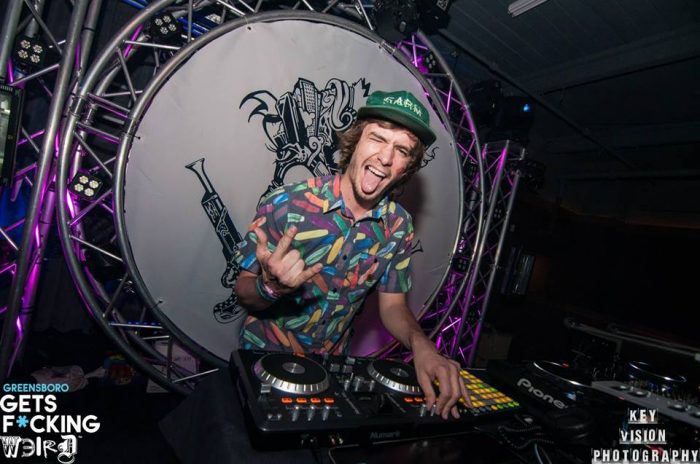 My favorite song by you would have to be ‘Snicka’. That creep level is undeniably awesome! Do you have a favorite track you produced and what would it be?

Some of my favorite tracks I have are unreleased at the moment. I’m usually very sheepish and shy about my music, but I’m getting very excited for some of the music I will likely released in the next few months. If I had to choose a favorite, it would be one of the HG Fortune ones. HG Fortune (Günter Hager) was a VST programmer and extraterrestrial enthusiast who passed away a few years ago.

A few years prior to his passing, he gave ALL 26 VST PLUGINS he made for FREE! He talked about wanting to progress the music scene and support low-income producers. Now some of these plugins are rather dated, but they create some of the most unique sounds I’ve ever heard. Definitely think alien orchestra. Still, he was a really kind person from what I’ve read, and he truly held others success above his own. Naming a song after him is the least I could do.

Do you have a favorite city you like to play in? Favorite venue?

Favorite venue I’ve ever played was a boat party in Atlantic City, NJ; hosted by Create., River Beats, and Pass The Good. It’s some of the wildest partying I’ve ever seen. People were literally hanging off the rafters going crazy. Every other boat in the Inlet was either scared or would start dancing too!

Are there any artists you’d dream to collab with? Artists that have influenced your music preference?

Wow, there are too many to name. Some of my favorite producers definitely have to be The Widdler, Jade Cicada, Thriftworks, Tipper (of course), and so many others. If any of them ever want to collab I’d likely be too nervous to do any good work.

Some of the best influences come from my ThazDope and NC family I’ve collaborated with or done remixes for, artists such as Murkury, Zeplinn, Pluto Era, Digital D, FRQ NCY, and Toadface. Seriously though, working in the studio or even looking at others projects is very key to expanding your horizons.

Listen to and download for free Jade Cicada’s Ego Saga:

Tell us about how you thought of the name Cut Rugs. What sort of meaning does it have behind it?

Uhh, my parents won’t be too proud of this, but Cut Rugs first came about when I was at my first music festival. After quite a bit of drinking and partying, my friends came back to finding me still dancing with no music.

Well, it wasn’t exactly dancing, more of slicing my feet back and forth in a “running-in-place” motion, tearing up the grass. Thats when my friends pointed out “that boy is cuttin’ a got damn rug over there”. From there the name kinda just stuck.

What are you looking forward to the most about playing The Untz Festival?

As much as I love to play, I’m even more excited to be a spectator. That lineup is BAE AF x1000! It’s funny, after being in the artist circle of friends for the past few years, I see so many friends I’ve performed with in the crowd at festivals listening to the music.

For some artists, we want to study what others are doing/what gets the floor reallllly moving/gathering inspiration; But at the end of the day, all of us are fans too. We want to party and check out great music too! haha Not fair that all the beautiful festy peeps get to have all the fun! Seriously though, that lineup is incredible.

Check out The Untz Festival lineup below: 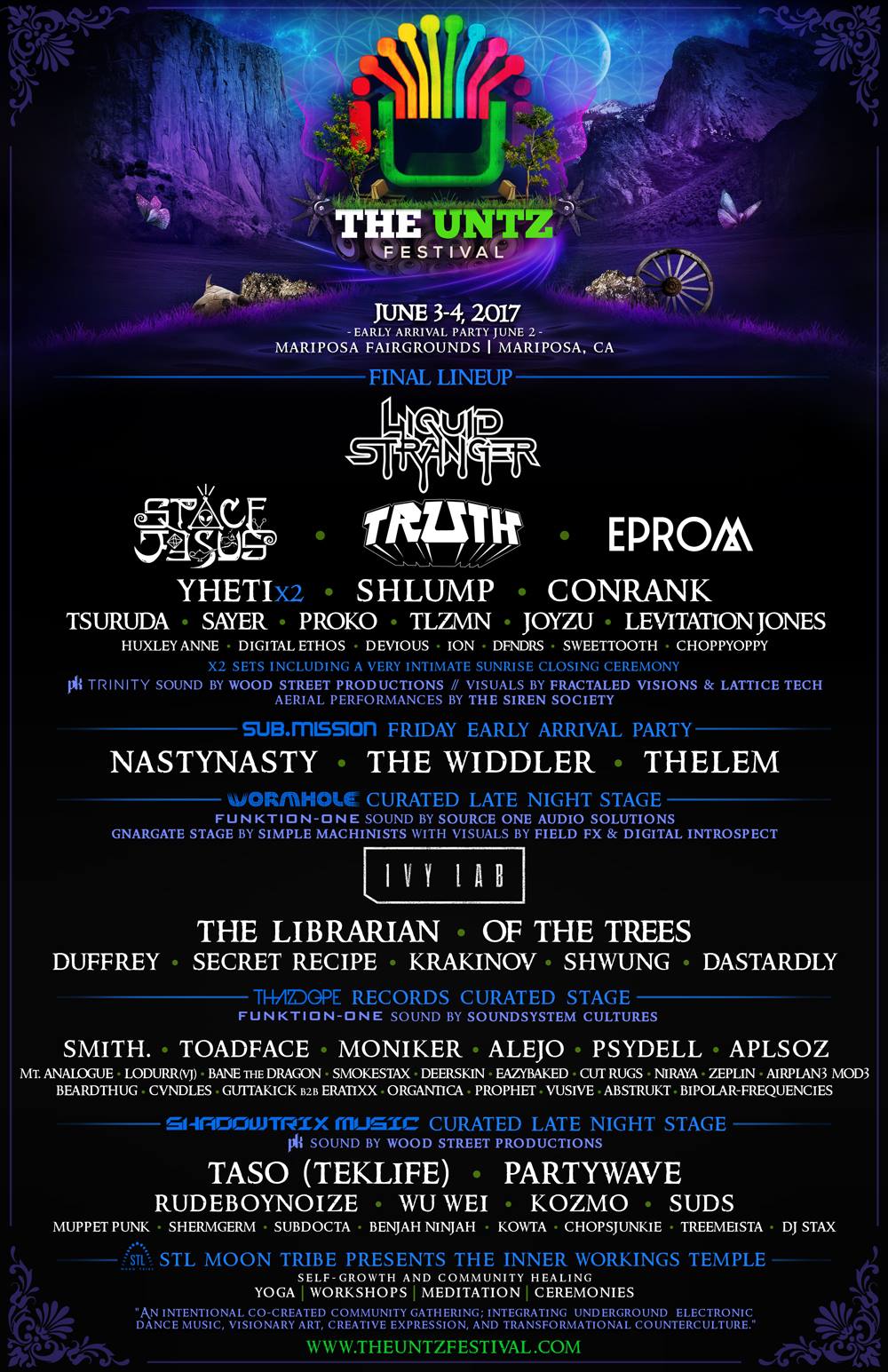 Enjoy our playlist for The Untz as you take your journey to Mariposa.