Grammy award winning producer, Damon Sharpe, sparks up the Fourth of July weekender with the burgeoning First Nations songstress, Alexis Lynn, by releasing ‘Make U Happy’. Hitting with piercing and satisfying vocals ‘Make U Happy’ is an emotive anthem that bursts into a euphoric sonic landscape designed to keep all-ages dancing all summer long.

Damon shares on ‘Make U Happy’, “Originally Alexis and her team came to me to remix the original version of ‘Make U Happy’. I really connected to the message of self love behind it. We loved the remix so much that we ended up turning it into a new original version. The first challenge was finding a new BPM that worked. Once I happened upon 124 BPM the rest really fell into place. Dialing in the drop and chords that felt emotive with the original melody.”

‘Make U Happy’ follows Damon Sharpe’s most eclectic of productions, entitled ‘Hollaback Girl’. Taking influence from the old classic, the Los Angeles-based DJ/producer has opted for a fresher and futuristic spin, as he implements his signature sound in a way that will scintillate even the toughest of crowds. Marking also the very first release on his highly-anticipated Brainjack Music record label, ‘Hollaback Girl’ is only the beginning to what is a promising transition from behind the scenes, and straight into the limelight as an artist to watch.

‘Hollaback Girl’ was the debut release on my label Brainjack Music and commemorates the two-year anniversary of Damon’s Brainjack Radio show on Insomniac radio.

Upon the release of ‘Make U Happy’ and while still buzzing from his EDC Las Vegas 2022 set we got the interview with the electronic music mainstay that is well within the 100 million streams club, Damon Sharpe. 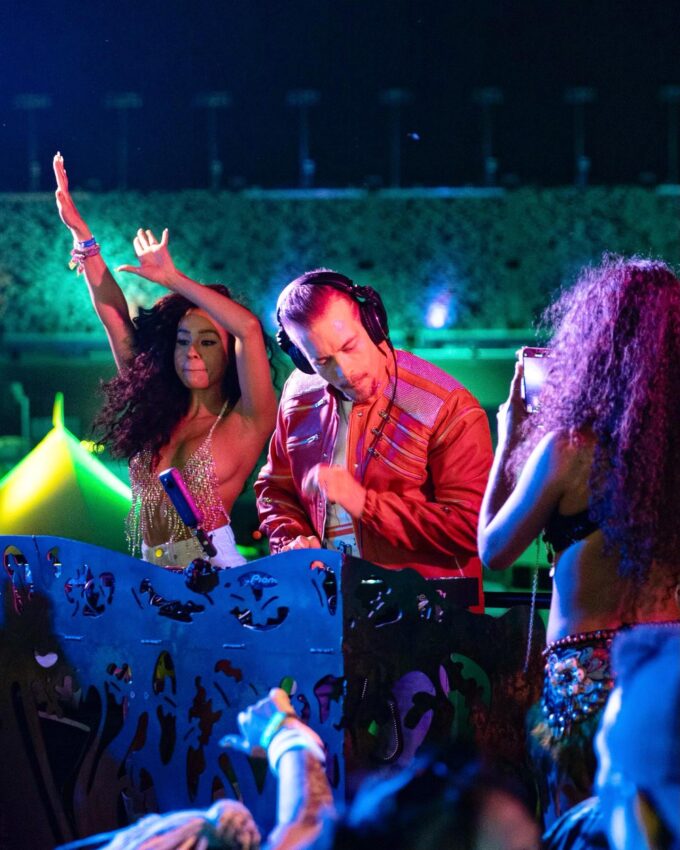 What is one of your favorite mottos or sayings?

Wow, I have so many. With every no you’re that much closer to a yes. Work ethic trumps talent. If the door doesn’t open for you kick it down.

What are a few tracks you find at the forefront of electronic music?

I think every collaboration is a new special experience and I am always doing my best to learn whatever I take away from every one.

Do you have any philosophies behind your music production?

Absolutely if it feels right then it’s right. Even if there’s a small seed of potential I like to see an idea through. If I come back to something the next day and there’s not any sort of “soul” to the idea then I usually ditch it and move on.

How does an EDC set differ from other sets?  What is a key characteristic to your sets?

I think it’s a little different for me each time but my latest set I did last month was very bass house and tech house driven. I really went with the energy of the crowd. There’s nothing like the crowd at EDC. So much positivity and love it’s incredible.

What have been some of your favorite moments on the dance floor as well as behind the decks?

I love dancing, so for me being on the dance floor and experiencing an incredible DJ takes me on a journey. I’ve been fortunate enough to see so many incredible ones play from Kaskade to DJ Snake to Alesso. When I’m behind the decks I pride myself on creating that similar experience for the crowd. I go with their energy and want to create something unique each time I play.

What is Brainjack radio about?  When and where can people tune in?  What is your selection process like for getting a song featured on the station?

Brainjack Radio airs monthly on Insomniac radio and then I repost it to Apple podcast, SoundCloud, Mixcloud 1001tracklists and all other platforms. I definitely curate the show very carefully and end up choosing about 30-40 songs initially and then whittle that down to about 18-20 tracks. I have also just launched my label Brainjack Music and the first release was my single Hollaback Girl which was a tech House flip of Gwen Stefani’s classic. ‘Make U Happy’ is the second release on Brainjack and I am looking forward to many more to come and to signing up-and-coming and established DJs to the label.

What are you excited about this week, month and year?

I got a ton of really cool collaborations coming up with Sunnery James and Ryan Marciano, Wenzday, Littgloss, Søren and many others. I definitely want to expand my brand as well as the label.