Emo is far from dead. In fact, the scene has been thriving for years in California thanks to T.J. Petracca, Morgan Freed, and Barbara Szabo aka Babs. On December 3, 2017, Emo Nite LA celebrated their 3-Year Anniversary with a full-day event at Shrine Auditorium and Expo Hall in Los Angeles. Emo Nite Day had multiple stages across the venue including performances from Machine Gun Kelly, From First to Last, The Used, Aaron Gillespie from Underoath and The Almost, Frank Zummo of Sum 41, Travis Mills, William Beckett from The Academy Is…, Craig Owens, and more.

Emo Nite Day headliners were a mystery to music fans. 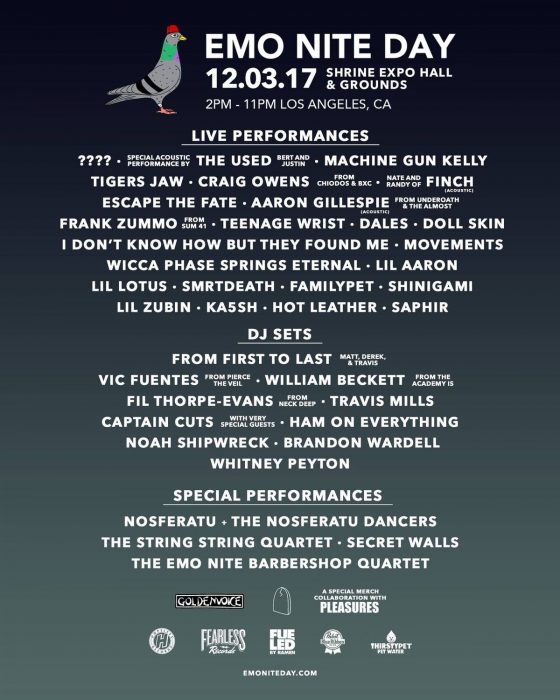 Live sets filled the indoor and outdoor atmosphere as artists spun their favorite, emo-rock hits. Attendees belted sadistic, relatable lyrics at the top of their lungs including My Chemical Romance’s “Black Parade”.

Many of the event’s attendees used to fall asleep with their CD player on repeat, analyzing the lyrics, and relating to these bands on a supernatural level.

Personally, I loved going to Warped Tour and meeting the artists behind the madness even at 15. I went through my emo phase as a teenager just to find it was never a phase. It’s an art form here to stay. With Warped Tour coming to an end in 2018, this event is spectacular and is going to capture the hearts of many. The founders have made my teenage, and hundreds of others, dreams come true. I wouldn’t have wanted to spend my 27th birthday anywhere else.

Watch what went down at Emo Nite Day, one of the craziest parties of the year, before you read on.

Shrine filled with magnificent performances on the electric day of December 3, 2017.

From First To Last teased fans by playing their fresh track “Surrender“. Original bandmate Sonny Moore, Skrillex, sings on the track just like their hot 2017 release “Make War“. Listen below to one of my personal favorites, and most played EDM tracks of 2017.

Sing along with From First To Last:

“I’m so bored of digging your trenches…
When all this time it was for your affection, that’s a lesson…
Sometimes you gotta leave that god damn thing right where you lost it…”

The crowd got down with an energetic moshpit as From First To Last debuted their song live on social media. Click here to watch. In February, Sonny got back on stage with the band for the first time in 11 years at Emo Nite LA proving this event is far from nostalgic. It’s the present and future.

Watch the magic of From First To Last getting back together:

That is just a taste of what the founders of Emo Nite LA have created.

They’ve spun electronic and rock into a masterpiece, an amazing party, where music fans are simply accepted for who they are, where they can be vulnerable, and surrounded by people who “get it”. Recording artist and heartbreaker Travis Mills, previously known by his stage name T. Mills, spun before William Beckett on the main stage.

William Beckett from The Academy Is… took the stage right after.

The Chainsmokers gave a surprise performance including their track “Closer” which features vocalist Halsey. 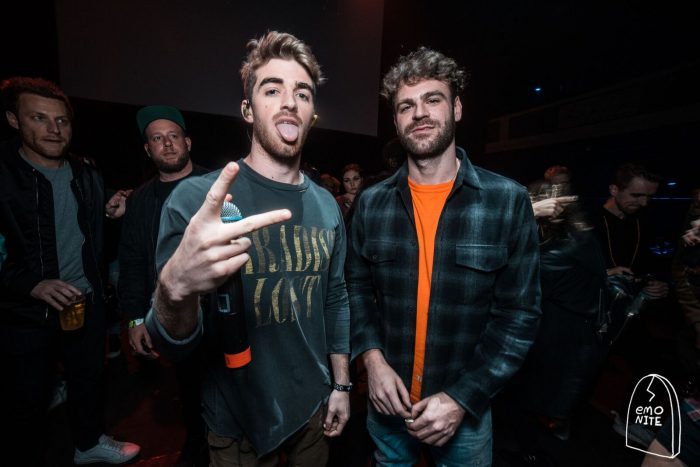 Press play on this alluring remix of “Closer” by Gill Chang as you read on. Oh, and it’s a free download.

“I know it breaks your heart
Moved to the city in a broke down car
And four years, no calls
Now, you’re looking pretty in a hotel bar
And I can’t stop
No, I can’t stop…”

Read this inspiring message from The Founders. Then, enjoy a photo tour of this magnetic party below.

“The last three years have been a wild, wild ride. Never in our wildest dreams when we decided to invite a few of our friends on a Tuesday nite to a dive bar in Echo Park to listen to emo and pop punk music, that it would turn into something like this. Thank you guys for building and fostering such a special community. Thank you for growing with us and supporting this thing through all of the different stages this party has gone through. Yesterday only made us more excited for the future of Emo Nite and we couldn’t ask for a better family to be on this journey with us.” 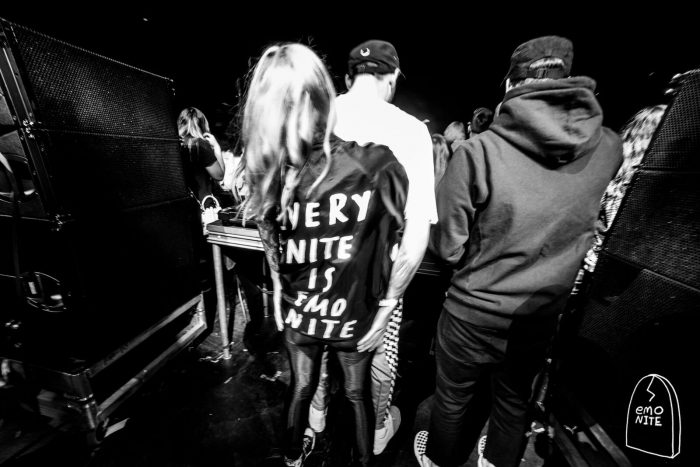 Want more? Checkout the incredible story behind Emo Nite LA before you go.

Listen to my mixtape “Make War On The Blvd Of Misery And Broken Dreams” to continue the vibe.